It’s been less than two weeks since the T&T Gymnastics Federation (TTGF) bafflingly decided to strip Thema Williams of the duly-earned privilege of representing her country at the gymnastics Olympics qualifiers. In that time, a surprising number of Trinbagonians have rallied to protest the obvious injustice, indicating that T&T might finally be maturing just enough to begin rooting out the endemic corruption stifling the country. In fact, a core group of citizens (referring to themselves as the Incensed and Right Thinking Citizens of Trinidad and Tobago) have led the charge in the public arena, releasing statements, giving interviews and working tirelessly to get answers to the nation’s questions about this debacle.

Of course, not everyone feels quite the same way about the matter, which is why some very curious defenses of the TTGF’s actions have emerged. As I believe in the importance of free discourse on any and all matters, I’ve decided to address them here with all the seriousness they deserve: the Maury test. 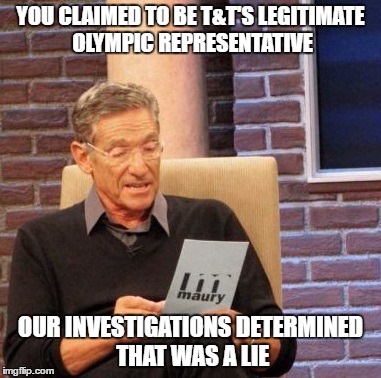 In no particular order:

That quote came from TTGF General Secretary Elicia Peters-Charles who, on April 21st, was responding to questions about whether the TTGF had bothered to inform Thema that she’d been pulled from competition. At that same press conference, however, Marquez admitted that Fuentes wasn’t properly consulted. The problem is that the athlete’s contract stipulates that only the HOD could remove an athlete “in consultation with [the] coach and relevant medical personnel” (who, you’ll recall both felt that Thema was fit to compete). So, naturally, the TTGF has since changed the story, claiming instead that Marquez was actually the HOD. Still no explanation for exactly how he could be running a delegation in Brazil from Trinidad, though.

Fascetiousness aside, it’s clear that – at best – the TTGF misstepped all over the place in their handling of this matter. They also misstepped in their assumption that this incredibly blatant… screwup… would go unnoticed by wider society. At this point, it would be less of an embarrassment for them to step down and avoid tarnishing T&T’s fledgling involvement in Olympic gymnastics any further.

Of course, that would require them to be more concerned with protecting the sport than with pushing their own agenda.

11 thoughts on “You are NOT the Gymnast”